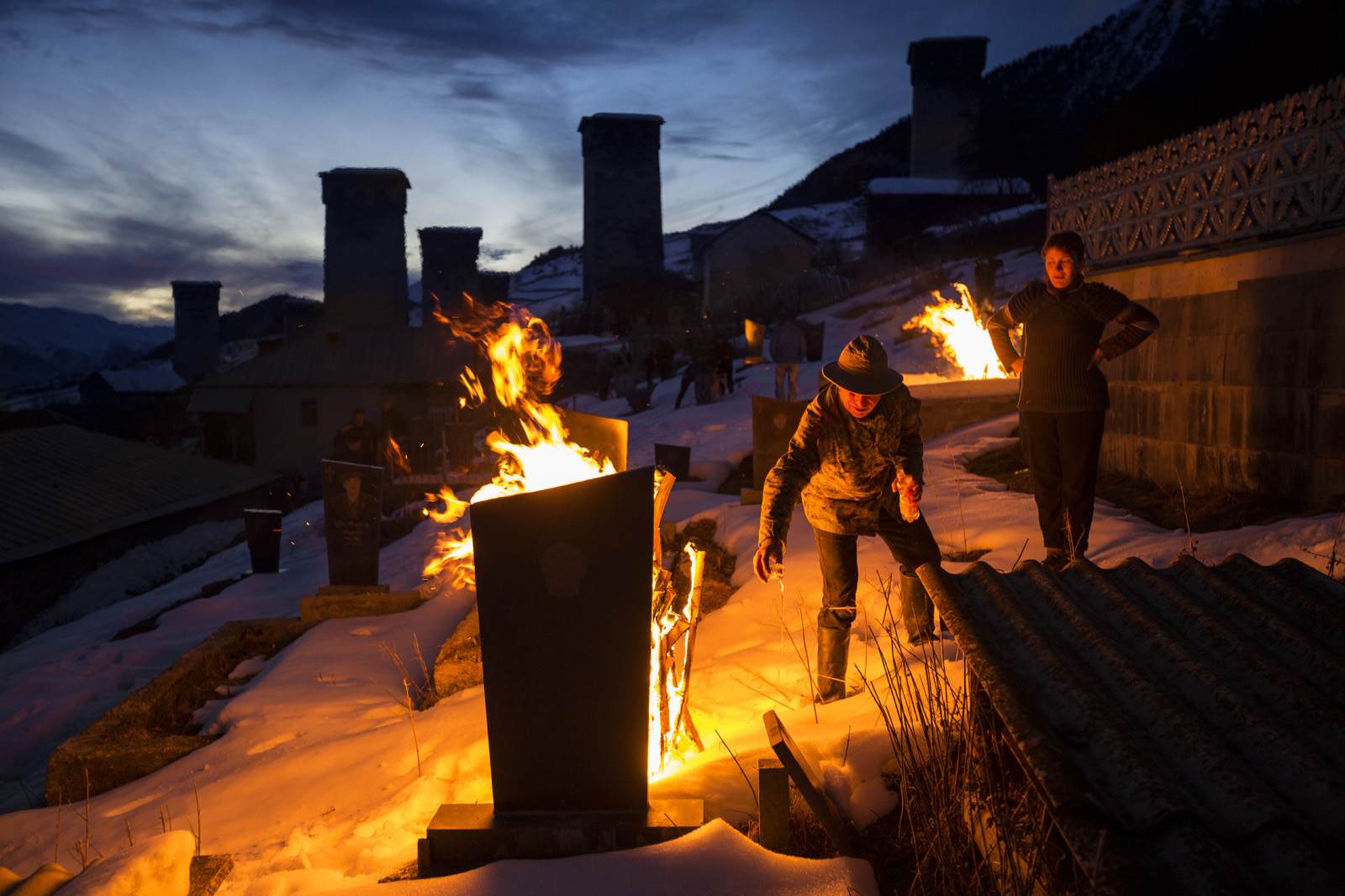 
LAMPROBA in Mulakhi village where relatives light fires on the graves of the dead and pour alcohol to them and make toasts. The ceremony predates Christianity but is still allowed by the Orthodox church in Svanetia. And explanation from a local of this whole season: "At 13 of January evening is called “Sheshkhvam leet”. Till the sun sets, the young man from family must go to the forest and bring the branch from pear tree. He puts the branch outside of the door of house. This ranch is called “KHUL”.

At 14 of January is “ZUMKHA” – new year and to every house comes “mchkhi”, which is the santa of house. He have some sweets in his hand and also little branch from “KHUL”. If the “mchkhi” (santa) is good person and he is kind man , than he brings “good leg” to family. It means, that all year will be full of successes .

Till 18 of January “KHUL” is outside of the door and every person which visits to family, has to take little branch from “KHUL’ and put on table.

At 18 of January , after sun sets comes “LIPANALI” and to all houses are coming the souls, of people which passed over. Women prepare fasten food. Young man cleans “KHUL” from little branches and makes stick. Gran father and his son holds the stick. Gran mother puts pillow on the stick and after grand son, like he sits on the horse. All of them are coming to home with candle and food and are saying special words. (Ask about it to Merab ) . Table is full of food and candles. Grand father and his son, with little boy are going around the table 3 times and little girls are swell the boy to make him shout, for continue living. After grandfather puts dough with cotton on the stick Puts it’s had in the stove, begins to stab on the cotton and asks for health and happiness and lot of ground and domestic animals.

Saturday evening souls are going to “LALKHOR” – the place where are coming all souls and they have huge negotiations about their family’s. What to bring them. They have to decide , who will die…This place is in the mountains of Ushguli.

At Sunday evening souls are coming back and from “LALKHORI”. They are cold so women are making hot foods , hot porridge. After 2 hours they are making new porridge for lame souls, because they can’t walk fast and they are late.

All family members get up, they heat the food and making nice table, with cakes and sweets and candles. Grandfather takes big plate with sweets , brad and meal in one hand. In another hand he has bottle of milk. His son takes the stick “KHUL” and they go around the table, saying their names and wish for them peace and good way. Grandfather spill the milk till the door of yard and souls are going. Yang man makes “LAMPAR” –bunch of Birch tree for “LAMPROB”, He puts the stick “KHUL” inside and puts this bunch back of the stove.

At 14 of February is “LAMPROB”, so you can see what happening on this day

O.K the pint of this tradition is the stick “KHUL”. We cut it at 13 of January and we burn it at 14 of February. This is the beginning and ending …"